It’s always nice to know who your dealing with so you can put a face to the company. Currently there is only me, my chief software tester (and number #1 daughter) Alex finished working for me January 2017 and is now working for the man in Auckland, thought my wife Helen is now taking the finance part off me which is a great relief.

I have two major applications currently in use, the Indevin Bulls-i Winery Management System which processes about 17% of New Zealand’s Wine and the Omega Seafoods Catch Program, both are updated frequently if bugs are identified or when customer requirements change.

My real name is Stephen Brown, how I got the nickname Boz is a long story and not really that interesting. I arrived in New Zealand in 2005 after a long career in ICT and electronics in the UK and Hong Kong.

I worked my first year in NZ for a nice group of guys at MCN in Blenheim supporting Microsoft networks and Servers (and while I got settled into the kiwi way of doing business) before deciding to branch out on my own.  I started working for myself at the end of 2006 running a small-trader company boznz.com, I ran this up until founding Roving Dynamics Ltd at the end of 2013.

Most Customers usually require a resume of projects, its tricky starting a company with open source at the basis having come from a history of closed source and proprietary projects and only time will tell how much I can release publicly (after all its usually up to the customer who pays for the work and the customer always gets the full project details and source regardless)

My apprenticeship was with the Government Communications Headquarters (GCHQ) where I spent a heady four years mixing college and in-house training courses. I didn’t think much of the in-house training bit at the time but by the end of it all I had done just about everything there was to do in electronics, telecommunications, micro-processors and programming. The qualification gained was a BTEC, HNC in Communications Engineering which is recognised internationally under the Sydney Accord and the NZQA lists as level 5 (or for some reason 6 if you pay for a pre-assessment!) anyway in 1985 it was a pretty mean qualification for a budding computer engineer to have.

From there I worked in several GCHQ technical departments in Cheltenham, UK and Hong Kong including two years from 1983 to 1985 in a research and development area creating a big computerised receiving system (Which I still better not talk about!). The work involved CMOS and 8031 (An 8051 without FLASH!) micro-controller circuit design and interfacing them to a VAX computer. I was actively involved in all the stages of the design, programming (in assembly language and vms pascal) and documentation until it’s deployment.

In 1985 I transferred to a support the maintenance of DEC PDP11/70, VAX/780 data processing and ARPANET networks. The job involved several months extensive training at DEC, The Digital Equipment Corporation which was then an IT monster, and subsequently bought by Compaq, then by HP, Now who knows (How the mighty fall!) I followed this by five years in a field service engineering role diagnosing network, system and hardware faults on TTL boards down to component level.

Life was good then and it was always a good feeling to be able to replace a duff chip from a machine containing thousands of the buggers and see it all spring to life!

Most of the rooms of equipment we looked after used the same technologies that are now in your $100 broadband router and PC, and it seems a bit surreal now thinking how I could spend a whole day tracing electrical signals around an A3 sized 128KB Memory board which cost several thousand pounds! Anyway it was all very insightful seeing how these devices worked from such a low level perspective. I still wrote programs of course, lots of them in fact, I even wrote my own programming language and compiler for Intel 8031/51 micro-processors which created binary files for copying to EPROM. I still have that compiler program on a 3.5″ floppy disk and it actually runs in Windows XP which for a program written for DOS version 2.2 is quite something! Unfortunately the Turbo Pascal source code and documentation were lost in the mists of time (which taught me some good lessons on backups!) but the principles are still there and they are the bits that really count.

In 1990, after several weeks training in the UK/USA on network and communications systems, I transferred to Hong Kong as part of a multi-national team of technicians maintaining a satellite communications centre. My job was looking after the international and local communications circuits, phone systems and networks. I wrote several PC programs to automate the running of the operations linking various telecommunications devices to allow such things as alarm monitoring and statistics gathering. The lifestyle value of this position was worth a million times the financial one and you worked in what could only be described as a country club with a satellite station bolted on. I would have stayed in HK forever if I had the chance, but was unfortunately dragged back to the UK at the end of my contract. I did however bring back lots of fond memories and a wife!

In 1994, I returned to the UK to take up a network project manager position in the Communications Electronics Security Group (CESG – another part of GCHQ). We were a small team supporting 250 users on a really creaky UNIX/PC based network and the IT policy was basically dictated by ICL by taking the manager out whenever they wanted to sell him something (Hmmm I bet that doesn’t happen often!). I actually enjoyed the job and managed several large projects, moving data processing centres and setting up new sites. It was also about this time that I also begin developing programs for the new Windows Operating system. I must admit as a pretty decent C programmer I struggled quite a lot with programming the Windows API in C++, I dabbled in Visual Basic a bit and then moved to Borland Delphi. I had already done a bit of Turbo Pascal at college and dabbled with it in-between so using it was a bit like falling off a log, but it did allow me to start creating some pretty complex programs at the time such as a helpdesk call logger used to track and escalate user problems and requests. I still used C when I was working on Unix systems and completed a lot of other training on network architectures, Cisco IOS, TCP/IP, network security, project management and Oracle SQL databases (My first foray into relational database design)

At the end of 1995, GCHQ decided it had too many engineers and paid off anyone who wanted to voluntarily leave. (A Strange decision only a government could make, especially as a lot of the guys who left came back as contractors on more money!) The timing however was perfect for me it coincided with the birth of my Daughter and so I left in February 1996.

In March 1996 I started my new job in Leominster District Council as the IT Manager. This was a fixed two-year contract to lead 6 other guys providing IT business solutions, programming and technical support for a local government Authority. The job was a major change from GCHQ as it included full control of all IT budgets, resources and the formulating and implementation of the IT/S strategy for it’s eventual transition to the Herefordshire Council.

Apart from the 50 minute drive to get to work it was a good position and a nice bunch of people to work with. There were a lot of problems though as the Infrastructure had been allowed to go to pot and the IT direction was being directed by the suppliers of the systems (Now where had I seen that before!). 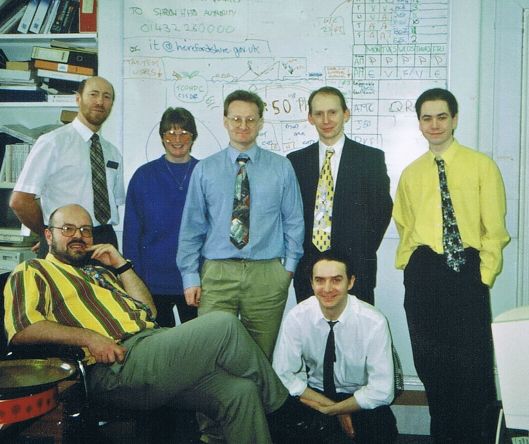 My management approach was very much hands-on and I had considerable success in stabilising the Department both politically and by introducing a stable networks and systems (Well, except for the Council Tax system written in PICK that I wasn’t allowed to go near!). During this time I attended several external-training courses and gained certification in NT4, MS Exchange, Citrix and AIX/UNIX. The knowledge from my previous job helped me formulate the System security policy and take on many programmer analyst tasks including writing the export routines for data migration of the planning system to a Mapinfo Graphical Information System.

At the end of my two years, the Council and the IT team disbanded, some moving into the new Council and some leaving for other jobs elsewhere. I was offered the position as the Network Manager but at the same time got another job offer much closer to home.

So in April 1998 I moved to REHAU a large privately owned Swiss/German company producing materials for the automotive, medical and building industries. The UK IT Department consisted of 7 guys responsible for all new projects and maintenance of the UK systems and infrastructure. My role as IT Manager was a hands-on one leading both the hardware and systems development and taking on some of the larger project, analyst and development work.

The companies 500+ XP/2000 desktop client systems were in a Windows 2003 domain, controlled by group policies and with back-end systems hosted on UNIX, AS/400, MS SQL and SAP R/3 systems. Additional reports and interfaces were written locally to fill in functionality gaps and add value to them. All the application servers were located at the head office and client applications must work efficiently over low speed WAN links and with high data security. During my time in REHAU I developed several stand-alone Windows programs and several large corporate work-flow systems which I’m sure have all been moved to SAP by now.

So at the beginning of 2005 I gave notice of my intention to make my long planned move to New Zealand, and me and REHAU departed on very good terms six months later.

So now I’m in sunny Blenheim, finally working for myself. My first year in NZ was spent at Marlborough Computers and Networks installing and supporting Windows servers and networks around numerous local businesses, this gave me a feel for how it all works and the courage to start out on my own. I parted from MCN on very good terms and still do occasional contract work for them when the need arises.

I actively keep up to date with all the newer technologies that affect my jobs through the various forums and despite the growing complexity I always try to keep comfortably ahead on all the hardware and software technologies I may become exposed to. Although in reality nothing really seems to change that much, in the 1980’s I was working with micro-controllers, C a few KB of memory, now I work with micro-controllers, C and a few more KB of memory (though the price has come down several orders of magnitude)

I have done several major projects for Marlborough businesses mainly developing SQL based business systems, though more recently I’ve seen a resurgence in making custom electronics systems which was my original passion (after spaceman!)

Outside of IT I enjoy diving, rock music, hot curries, comedy and anything to do with space or science fiction. In Winter I usually make as many trips to Rainbow ski field as I can though I never seem to get any better at skiing, and in summer I’m usually hanging around the bays of Port Underwood or Marlborough Sounds with my dive buddy Brian.

Trying to fit into my 16 year old wet suit in the Marlborough Sounds!

I am an avid reader and have always said that one day I will one day write my own novel (a novel of love, death, intrigue and brain eating monsters!).